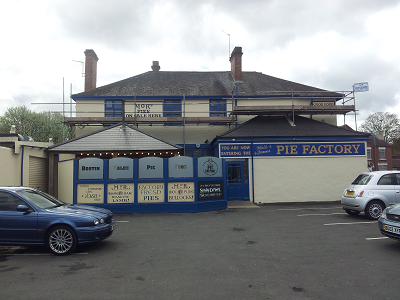 I’d heard about this place a while back and it came with numerous recommendations. Situated in a non descript corner of Tipton in the West Midlands, I was told that Mad O’Rourkes was THE pie place to go to.

We visited Mad O’Rourkes as a pre cursor to the West Brom v Wigan game and as we approached the establishment it appeared to be heavily scaffolded up and my still empty tummy flipped as I thought “shit, it might be shut”. It wasn’t though, it was merely undergoing a bit of a facelift and getting a lick of paint. Blue paint in fact, some of which ended up on my hands after my hand to eye co-ordination let me down and even after clearly scanning a “WET PAINT” sign I still ended up planting my fingers in blue emulsion.

As I entered via the car park, the exterior is a mecca to pies and a big bold mural on the wall advises that “You are now entering the World Famous Pie Factory”. I’d never heard of it until a few months ago being perfectly honest but it is an indicator that augurs well for this afternoon’s nosebag. It is a big dominating corner plot which once operated as an entertainment venue where a young Frank Skinner first plied his trade.

The interior is heavily decorated from pig’s heads on the walls, fancy slogans and traditional cooking utensils including huge steak pans. Everything you see is a homage to pies and their ingredients, although I suspect they are taking the piss with their “Hamster pie” range above the bar. And the bar – if them making their own pies isn’t enough to tempt you in, they also have a range of select real ales from the nearby Enville brewery and I devoured a pint of Lump Hammer Gold served in a traditional handheld glass, last seen in the Rovers Return circa 1987. 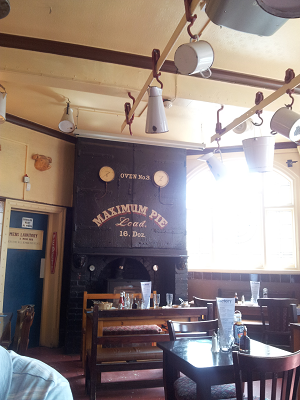 The decor is minimal with benches and chairs with sawdust scattered on the wooden floor and it appears to have a good mix of clientele from students to families and the centrepiece on the wall is a huge oven. Onto the pies and there is a wide selection on the menu, each with it’s own quaint nickname ranging from Posh & Becks (Steak and Stilton), a Nigella (Posh Chicken) pie and the slightly less than politically correct Barrymore Pie (Faggots). Not that they exclusively serve pies as they also do a range of grills and burgers and a “Pierates” children’s menu. There’s probably a vegetarian option or two in there if you’re not repulsed by all the ceramic pigs’ heads peering down at you from the ceiling.

I decide to opt for their signature Cow Pie dish at just under a tenner, meat and veg all self contained in a huge dish with a puff pastry lid and shortcrust pie horns poking out of it in true Desparate Dan style. I pay at the counter and see a large West Indian lady toiling away in the kitchen, pots and pans crashing everywhere. I do like to see a busy kitchen. I get a spoon with a number on it for my troubles and a wait of no more than twenty minutes.

The pie when it arrives isn’t that intimidating on first glance and I have initial concerns that maybe I should have ordered a side of chips or veg, as indeed my co-diners have received with their “Posh & Becks” – served up in one of those little wire chip pans which are all the rage these days.

As I set about my task though I realise that this is not one for the faint hearted. Although the puff pastry (top crust only) is a good three inches tall beyond that lies a mountain of meat to test the biggest of appetites. There is also veg in there: potatoes, carrots and button mushrooms but this in no way compensates the sheer volume of steak in there. The chunks are huge and bursting with intricate flavour and swimming in rich, luscious gravy. I break off the cow horn and use the sturdier pastry to mop some of it up, although the fresh tasting carrot and potatoes also serve as an excellent compliment to the masses of beef contained within. 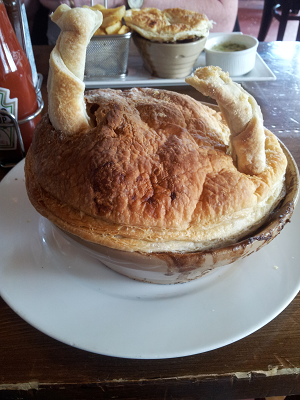 I get around half way though when I need my first breather, I can feel a little white flag poking out of my bulging stomach and I’m mildly sweating as the filling is piping hot. I look at the menu again: All 4lbs served to your reinforced table. 4lbs!! Doesn’t sound a lot but when McDonalds do a slightly bigger burger and call it a quarter pounder, well – multiply that by sixteen and you get some idea of the scale of it.

I finish what’s left of my ale mainly to cool myself down and plough on regardless, still just about enjoying the contrasting flavours and concentrating on clearing the meat up – although the potatoes are also delicious dipped in gravy. The lid is detached at this point and I rummage about underneath but with a quarter of this beast left I know it has me beaten. I’m doing no more than move the food around like a hyperactive child trying to make the plate look more empty so I can leave the table and go back on my Nintendo DS. I ask the two lads with me if they want some as they have long-since polished off their medium sized pies (although they are dwarfed by this monster) but they’re full.

I feel somewhat less of a man upon leaving not only some food on my plate but also some meat. That’s my rules when struggling you see – make sure you at least polish the meat off. It’s clear that this is no ordinary pie though, it is a remarkable pie and I finally down tools feeling suitably full but not to the point of making myself ill for the sake of it.

It’s nearly 2 o’clock and the lunchtime trade is dying off as we make our way to leave with me skulking off somewhat as I always feel like I’m personally offending the chef by not clearing my plate. I also didn’t realise that you get a certificate for finishing it – or a red one for failing to do so. I chuck a few quid in the bath which doubles as a tip bucket and make my way out, carefully negotiating the newly painted blue doors and marvelling at the justified reputation of Mad O’Rourkes. 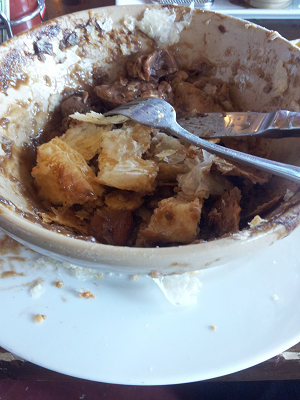 Brilliant atmosphere, fascinating place, great food, a fine selection of hand pulled ales and now a proud recipient of a rare Life of Pies 10/10 mark for the size category. Seeing as their signature cowpie was far too bountiful for my admittedly moderate appetite, I could foresee no other conclusion……