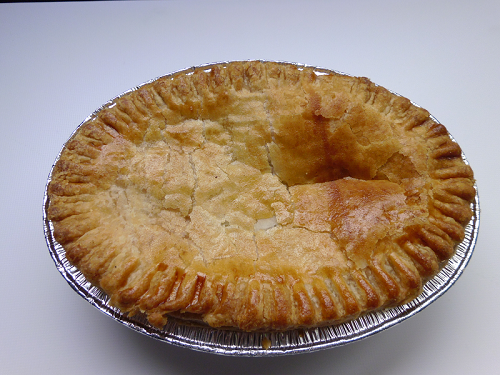 WAYNE ROONEY RETURNS HOME INJURED FROM FAR EAST TOUR  scream the newspaper headlines. Poor lad. He probably fancies a pie right now. and I think I’ve found his local pie shop, that’s Wienholts in Alderley Edge, the place where Coleen and the other WAG’s get their steak bakes to go with their fake bakes.

I’m not saying it’s posh around here but I’ve heard off a mate that they call a sausage roll a HAM ROLL, so I am expecting the pricing policy to be slightly out of sync with the Pound Bakery. Here’s hoping they take credit cards. It will be an experience regardless and Wienholts are something of a famous name in the locality, named after George Wienholt, a German immigrant who settled in the area in the late 19th century.

I approach from the country roads linking Knutford to Alderley Edge and every house is a mansion with long, gated driveways flanked by lush, green fields. It’s a different world and you can smell the affluence be it sportspeople or stockbrokers but I soon arrive in a bustling little town catering to it’s core market with a main street chock full of swinging boutiques, jewellers, pavement cafes and those quirky specialist shops which sell luxury cheeses and other daft shit only posh people can afford.

There are some normal people with normal sized houses as well it is only fair to point out but they are a touch in the minority around here and probably aren’t too welcome at Panacea, the elite nightclub next to Alderley railway station frequented by Rio and the Rooneys amongst others.

The main drag is gridlocked with nowhere to park. I drive the full length and double down a warren of side streets and eventually find a tight spot to reverse my car into. For all the picture I’ve painted I end up parked outside a boarded up house with a dodgy looking block of flats on my left with a few tracksuited youths loitering around looking for something to steal. Oh well, the cars I’ve squeezed in between are worth ten times mine anyway.

I walk into a chemist for some paracetamol as I’ve not been feeling too chipper and even the counter assistant is unbelievably glamorous. She must be pushing fifty and has got a broad Nottingham accent and I am left to speculate which faded Eighties footballer she was once married to. Promised the champagne lifestyle and now sent out to work in the local chemist to help pay the kids’ college fees. Definitely not Neil Webb’s wife because I used to fancy her, even though she was an annoying tit on telly.

Back on to the main road and what to make of Wienholts. Or more pertinently what did they make out of me? A complete mug, that’s what! Letting me stand there for ten minutes fuming like an industrial chimney while they serve random people – I can’t work out what’s going on here but it definitely seems like a case of “if your face fits” amongst the aristocrats of leafy Cheshire.

Or maybe dickhead here didn’t realise that you have to take a token from the dispenser behind me to get served in turn. Schoolboy error. Ooh it must be fun for them when a docile non-local walks in!

So for posterity, the correct way to do it is to take a token with a number on it off a hook by the door and wait for the number to be called out. That’s if they do call the number out, they just seemed to be waving it in the air although maybe I was just too slow on the uptake while I was busy surveying the scene and mentally making notes. Clearly it is a good, honest system and I am a complete fuckwit for not being alert enough to use it.

I could have had half a dozen pies from here they all looked so appetising and they don’t even do my preferred meat and potato version, unusual for the North West. They’ve got little pork pies, big pork pies and enormous ones the size of a dustbin lid for around a fiver; chicken, stilton and leek;  plate cheese and onion pies, turkey and mushroom, a tad small these but elegant looking amidst an excellent overall choice.

The infamous ham roll is also on display but they also have party sausage rolls behind the counter so let’s give them the benefit of the doubt and assume it’s something slightly different. Curiously, the pasties are shaped exactly like the sausage rolls. We’ve not had this debate yet have we? The “what shape should a pasty be?” debate. Well these look like rolls, cylindrical and open at both ends, a new one on me and I’m eager to try. There is a traditional Cornish pasty on offer as well here though. And they also do some proper enticing looking steak pies – so one of each I reckon.

Not that it’s all about the pies, there are little cheese savouries and sumptuous looking potato cakes on offer and the most marvellous looking gateaux at £15 a go, I’m not sure what a crystallised fruit gateau is but I know I can’t take my eyes off it while I’m aimlessly waiting to not get served.

I eventually cotton on to the deli style queuing arrangement and I order a steak pie for £2.35 and a meat and potato pasty (roll) for £1.50. They look and smell so good I’m tempted to review them both but whether you are a sweet or savoury fan this is truly a magnificent fairy tale of a bakers with so many luscious items it’s easy to forget to pick up your token when waiting to get served. 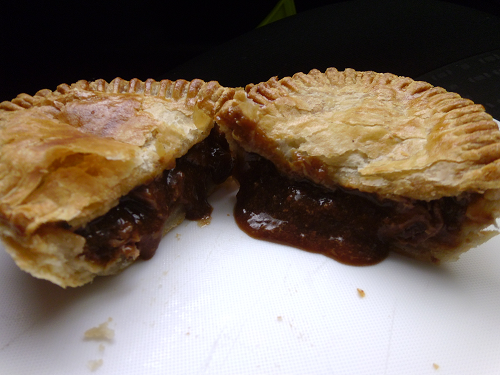 THE SCORECARD
Service: 7 I can’t blame them for the fact I am a rampaging simpleton
Filling: 8.5 gravy all over the shop and hefty chunks of steak coming at me like bouncing bombs. All that’s missing is the Dambuster’s theme tune.
Crust & Pastry: 8 soft and flaky and also came in a foil tray. Bizarrely, there wasn’t one on the display counter, they actually put it in a tray for me once I bought it.
Taste: 9.5 Orgasmic. Absolutely astonishing. The richest, pepperiest gravy you will ever encounter and lashings of it. A good slice of seasoning in there and a peppery kick to it which positively exploded in my mouth. Close to pie perfection.
Value for Money: 7 not cheap but bloody good
Size: 7 average
Warmth/Smell: 7.5 There was a reassuringly expensive aroma wafting off this baked comestible.

OVERALL VERDICT: I walked in expecting much and left having encountered one of the best pies I’ve had in years. A respectable 54.5 out of 70 score charted.

Just enough time to devour the pasty for an encore then. It surely couldn’t be better than the steak pie, could it? Well, no but it was still pretty fine. A more budget priced £1.50 and with a touch of novelty value about it due to it’s circular nature. The filling was dark on the outside edges but lighter as I bit into it. It was a lot drier than the steak pie with no gravy to speak of but it was jam packed full of tiny meat and potato morsels mashed together with little flecks of carrot. It was well seasoned and I almost got a hint of curry in there at one point. Another stunning effort but I’ve left it out so that Wienholts can concentrate on putting it’s best man forward so to speak. If the steak pie is indeed it’s best product. Maybe I should go back for more? or tweet Wazza to ask for his opinion?