The great stick up job! 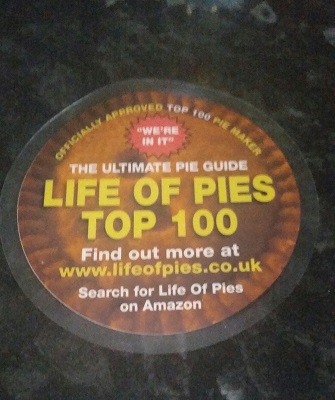 If your local pie shop is any good, you may have not noticed a new adhesive adorning the window. A few weeks ago I took the plunge and ordered several hundred car stickers in a bid to spread the gospel of good pies.

You can hopefully see an example of these very stickers in the images included in this blog.

If I’m honest, the purpose is twofold and ideally of mutual benefit. From my perspective it will give sales of the book a much needed shot in the arm, as people who go into pie shops generally like pies and may well be interested in reading a book all about finding the nation’s best pastry products.

From the vendor’s perspective, well the concept behind the sticker is in a similar vein to the CAMRA stickers. If you’re in a pub and you see one of those stickers in the window promoting that an establishment is in the Good Beer Guide, well you’re probably in a good place.

It would undoubtedly give me greater exposure if I simply sent out stickers to every pie shop featured in the book rather than focussing in on the Top 100.

However, what I’m finding out already is that some piemakers are getting in touch to ask what I’ve written about them. Telling them I have written that their pies were shit, too small, expensive, burnt to a crisp and smell of catfood isn’t going to go down too well. That wasn’t all the same pie before you ask, perish the thought. 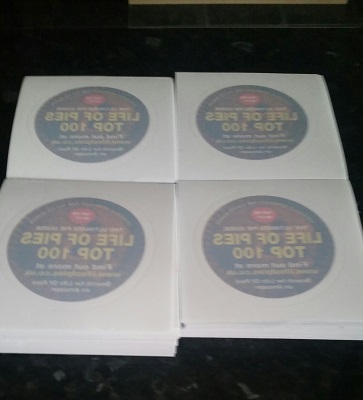 In addition to this, I wouldn’t be so bold as to claim that the Top 100 pies in the book are the best hundred pies in the country, they were simply the best hundred that I managed to get my hands on, however those pie suppliers in receipt of this accolade are still getting in touch proud as punch that I have seen fit to recognise their baking feats.

As a pie eater, if you should happen to chance upon this sticker then you know you are entering an establishment which makes decent pies.

And of course, I am hoping that if the sticker is displayed with some prominence, it will tempt some pie fanatics into investing in my little guide to the nation’s top pies.

Solidarity, not to mention solid pie fillings is the key! Together we will be a nation of better pie makers/eaters!!

Life of Pies is a book about pies, it costs just £9.99 plus P&P and you buy a copy online here