It’s time for the latest episode of my “pies which didn’t make it into the book (and probably deserved to)” series and today I’m sampling the pies from Derby House, or rather Taylor’s Farm Shop near Ormskirk, West Lancashire.

For all the pies I tried during the making of Life of Pies (copies still available here etc etc http://www.lifeofpies.co.uk/buy) I never visited my local farm shop, so it’s time to rectify that and dive back in on the pie trail.

Derby House is a place where the well-heeled “ladies do lunch” in the heart of rural (rich) West Lancashire, just a couple of miles over the border from me in Wigan and I’ve kind of grown very fond of the WN6 Wrightington gastro-scene with the White Lion on Mossy Lea Road another hot tip on the pie front (review to follow).

Anyway, Taylor’s Farm Shop are based in Lathom but have a branch within Derby House, along with the aforementioned posh restaurant (Alhambra on tap though lads!) and high end outlet shopping facilities. They also do some spiffing real ales as well.

Let’s focus on the meat though and before I get down to business I’ve got to say that Taylor’s are my supplier of choices for chicken breasts, prepared meals and a fine assortment of barbecued meats, even though it’s October and I’ve barely had the barbie on this year to my eternal shame. I’ve always eyeballed the pies, but I generally go there to get my healthy veg and chicken breasts and attempted desperately to avert thine eyes.

No longer though, as today I venture in and purchase one meat and potato pie (price £1.69). They also have a range of other flavours including steak, steak and ale and cheese and onion in both individual and plate pie form.

Anyway, on with the review: 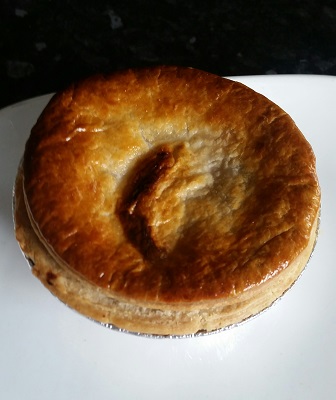 Place: I love it here, always served by polite young men wearing proper butcher’s aprons which is a joy to behold. Select your own meat and pies and take them to the till and get a free, yes FREE plastic bag! 9

Pastry: Top crust looks a bit ropey colourwise, a bit thin in the middle and underneath and looks easily detachable but to its credit, it’s quite sturdy overall, holds together nicely with a crispness to the slightly flaky pastry. 7.5

Presentation: It’s giving off some serious heat as I pull it out of the oven and like I say, when you choose your own, well you always try and pick a good ‘un. 8

Package. It is an exceedingly well-filled pie, crammed to the rafters with an above average ratio of minced meat to diced potato. 8.5.

Palate.  I was slightly worried about the moisture issue as there’s not much gravy floating about in there but it just about gets away with it and there’s a wonderful softness to the taste having whacked it in the oven for twenty minutes, the mincemeat melts on the tongue along with the juicy potato. 8

Price: Hmm, I’m off the full time pie reviewing scene right now. I used to consider £1.69 a bit top end but it’s probably roughly comparable to the well-trodden (in Wigan) Galloways and Greenhalghs scale in terms of what they charge these days for a meat ‘n’ tater. 8

Portion: A very decent sized, heavy pie whereby one is nearly enough and two may well be too many. Add a bit of peas and gravy to it and you’ve got yourself a belting meal. 8 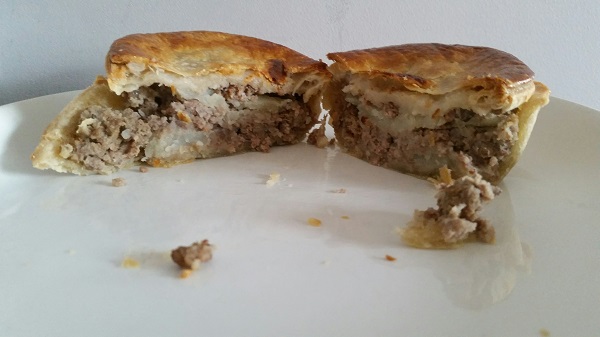 You can find reviews of another 314 pies in Life of Pies, a light hearted tour of the nation’s pie providers priced at just £9.99 including FREE POSTAGE. Click here to buy!