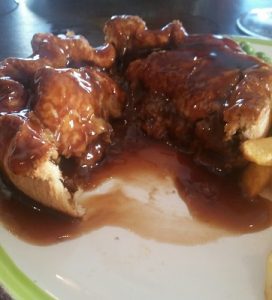 It happens once maybe twice a year, when the time comes to empty my shed, usually quickly followed by a tip to the trip and whacking a load of stuff on eBay. Unfortunately, I also uncovered a whole stack of boxes of books. Pie books, the bane of my life.

I’ll be honest, I’ve done very little in the past year to do anything about this. Having two young children has rendered it somewhat impossible to engage on any kind of marketing campaign. Like most authors, I wrote the book and thought it would sell itself. I also had a string of bad luck which regular readers may be familiar with: a hacked laptop, a lost pen drive, books stuck at customs, a documentary recorded then subsequently pulled by the BBC. But I don’t like to go on about it or wallow in misery.

I did the only thing that felt right, I ate more pies. I went to the pub yesterday and had a steak and ale pie. The crust was intricately crimped and the filling was dark and meaty. It was average not brilliant, just your bog standard pub grub fayre but it was nice and filling and there weren’t too many after effects given the thickness of the pastry. My local has also started doing a COWPIE now, as made famous by the Mad Pie company in Dudley. I bottled it yesterday, as I’m on a bit of a *whispers* diet generally, but I’ll tackle it soon I promise.

Anyway, a solid 7 pon 10, could have done with a bit more gravy and maybe even a few more peas, which were standard garden peas. Not that I’m an expert on peas. If I was I could travel the country sampling different kinds of peas and maybe write a book called “Life of Peas” at great personal expense, and bugger everything up while doing that as well. Just for old time’s sake.

So basically I need to GO AGAIN, as seems to be the phrase in popular footballing parlance and I suspect it starts with a bit of blogging. It’s not like I haven’t been up to owt, I had a great time at the British Pie Awards in March and I am due to be going back to Melton Mowbray in a few weeks to give a talk about pies at an event gloriously called PIE FEST!!

The old pie blogging game is a bit more crowded these days since I first switched to writing about pies instead of football. There’s a lot more to read and a lot more free information out there about all the wonderful pies that you can sample up and down this fine nation.

As cunningly eluded to above, I’ve been on something of a healthy eating kick recently but I will always be a sucker for a good pie and seek them out everywhere I go. I wouldn’t proclaim to be an expert, I just wanted to write a book and yes, I have many, many copies left and some bills associated with it which haven’t yet been covered.

Like most things, there is so much free information available on the internet, who on earth would pay a tenner for 388 well-crafted and illustrated pages?

Like I say, it’s a cracking gift for the pie lover in your life and hopefully the content amuses and educates with a bit of pie knowledge and some useful ideas to liven up your lunch (sorry Wiganers, I mean DINNER!!)

Loads of people who have bought it have loved it but perhaps as it’s spreads across a number of genres, it just hasn’t got the exposure it deserved.

As for the pies, I enjoy them a bit more leisurely now rather than talking into my phone between mouthful thinking up words which accurately capture every element of the baked beauty I am scoffing on.

Now the site has had a revamp, I’m going to be doing a bit more blogging and adding more content in a vain attempt to shift a few more copies of the book.

Finally, to get my appetite going again, I always need a challenge. Now I’ve got a 1 year old and a 6 year old, I am somewhat restricted in my gravy gallivanting, but here are three of my aims over the next few months to get out and eat pies.

Number one, I may be spending some time up in the Lakes this summer and whereas I will undoubtedly drop into Greens in Barrow. However, I’d also like to take a West coast tour up to Whitehaven and Workington. Why? I just have a hunch that these working class Cumbrian outposts will have some cracking butchers and bakers delivering big, great value pies.

Number two, York. As per the barely concealed Shed Seven reference in the title, York is a city I believe worth visiting on the pie front. I’ve been before for football and social reasons but it’s been a while. I’ve had several recommendations, particularly from a Forest fan on twitter @MarkWinNFFC plus a few other mates have been there. This screams “family day out” to me.

Number three, I really must pay the Piebury Corner a visit, they were a shocking omission from my book first time around, but they also have expanded to open a shop near Kings Cross/Euston. As I occasionally travel into London via nearby Euston, I really don’t think I have an excuse any more not to try their superb pies.

In the meantime, keep sending me your pics of pies. I love sharing them and I love receiving recommendations. Just in case, there ever is a LIFE OF PIES 2!***

***And as ever, the answer to that is, I’ve got quite a lot of copies of Life of Pies 1 to get rid of first!

Ahem, and with that, here’s where you will find the SHOP