As many readers know I’m a Wiganer as well as a pie lover, and let’s face it, the two normally go hand in hand anyway. Following Wigan Athletic’s remarkable run to the quarter final of the FA Cup, the Rolling Pin Bakery in Wigan decided to produce a one off pie to celebrate our centre forward’s goal scoring feats.

Without further ado, your roving reporter, who is technically on a diet, thought it best to go and check it out in the interests of research.

The Will Grigg pie contains chicken, chorizo (pronounced CHH-orizo NOT Kor-izo eh Pie at Night lads?) and retails at the princely sum of £1.50. 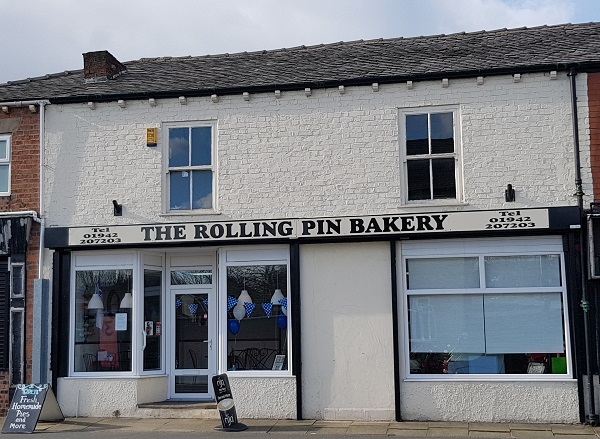 I’ve been to the Rolling Pin quite a few times, and it is just a hefty defensive clearance away from the DW Stadium in downtown Newtown. Like all traditional bakers, it possesses that earthy Wigan charm behind the counter. I’m served promptly, called “love” (and wouldn’t have it any other way in Wigan) and receive my piping hot pie in a paper wrapper folded over at the corners. Place 8

The meat and potato pie is my usual order from here, and just like that pie, the top crust possesses a firm, well defined crimp and wonderfully shiny glaze. The piece de resistance on the top is a shortcrust, pastry cup, which whereas not quite a replica of the FA Cup is still very ornate. You know me by now, a bit of a sucker for decorative pastry. Pastry 9

The pie was very hot in my hands when served so I gave it ten minutes to cool down as I’d heard it could be a messy one and I had no cutlery to hand (and why on earth would I need it anyway?) The smell was a fusion of fresh pastry and curried spices which circulated my car with a bewitching aroma. Presentation 8

As for the contents, well as promised there were plenty of small chunks of chicken interspersed with bits of chorizo all wrapped in a tangy, almost tikka masala like sauce. A creamy, sloppy filling but the pie and filling held together well with just a bit of spillage collected in the tray. Package 8

I kind of expected something else, going off the type of chicken and chorizo pies I’ve had before which weren’t necessarily spicy in flavour and this was more of a curried pie but then as “Will Grigg’s on Fire” why wouldn’t it be a hot one? Was it as fiery as it’s namesake’s goal scoring prowess? I felt not upon eating it but towards the end my nose was running a bit, maybe just like Will Grigg, it’s all about the finish. I can tolerate the hot stuff usually, so maybe there was a bit of subliminal heat in there. Overall, an unusual and unique flavour Palate 8.5 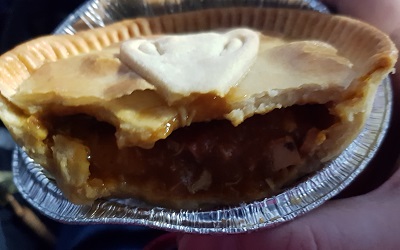 The cost was £1.50, which I used to think was a bit pricey when I was writing the book. However, seeing as my local Greenhalghs now charges £2.05 for a meat and potato, it is actually quite reasonable for this day and age. Price 8

In terms of size, it wasn’t the biggest pie but then “novelty” pies usually aren’t and it is still a reasonable size with a bit of depth to it. Team it up with a meat and potato and the job’s a good ‘un. Portion 7.5

OVERALL 57/70 A high score indeed for this one off addition to the Wigan pie scene. My mouth’s on fire, your pie shops are terrified. And well done to the Rolling Pin for their ingenuity. They’ve undoubtedly got a lot of publicity out of it, but this is Wigan, and when we want to commemorate the achievements of our local sports teams, well there’s only one way to do it: name a pie after them! 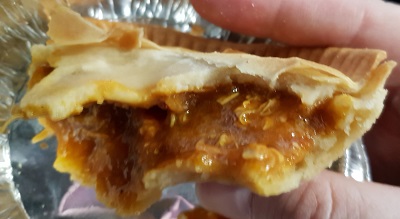 Footnote: If any other Wigan bakeries want me to test out their new pie flavours, you find me on Twitter or Facebook.

Life of Pies is a 388 page book celebrating the country’s finest pies and one man’s extensive search to find the perfect pie. Available to buy here for £9.99.