Put a DUNK on it! 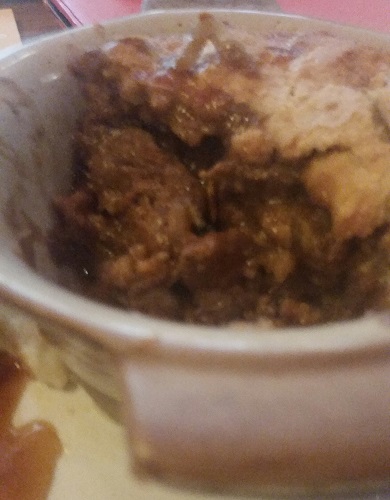 It was a sunny, summer’s day when I found myself at the Table Table chain in the Stone Cross pub near Haydock. It was actually the same day as when I last updated the blog and I had already polished off a Greens Cheese and Onion pie for lunch yet as I found myself perusing the menu, I uncovered a fine selection of Dunkleys pies to be on offer.

Now me and Dunkleys have a bit of history. I tried desperately to seek them out during the making of Life of Pies, having read that they had won an award for being the best pub pies in the country.

I rang up Dunkleys head office in Northampton several times. Politely asked where I could get their pies from. Gently enquired would it be possible for me to buy some which they could ship out to me. Sent a formal email requesting a list of retail outlets where said pies could be procured. Then ultimately shouted my head off down the phone to them “JUST TELL ME WHERE CAN I GET YOUR F&*(%$£ PIES FROM???”

Nah, I would never be so uncouth. The lady I spoke to was incredibly rude to me however, and actually refused to tell me where I could get their pies so I gave it up as a bad job and went to Fred Elliott butchers instead for my Northamptonshire pie fix. link

Eventually I managed to glean the fact that their pies were served up by none other than Wetherspoons as part of their cheap and cheerful pub fayre but by the time I became aware of this fact, they had disappeared off the menu in 2013, to be place with a steak and kidney pudding (aka Babbies Yed). Don’t get me wrong, I’m partial to a pudding (in every sense) but it’s not quite the same is it? 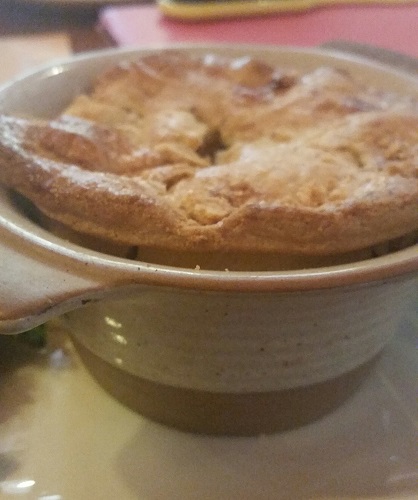 I felt sufficiently aggrieved by this scandalous omission to write to Mr JD Wetherspoon himself complaining about the removal of pies from the menu. A few weeks later I received a lovely letter back addressed to a Mrs Jones of Pontypridd apologising for the bad behaviour of the gentlemen on the next table who had spoiled her evening.

But anyway, let’s not worry about that. You’re here now Dunkleys and that’s all that matters!

On initial inspection, there really isn’t much to dislike about a Steak and Merlot red wine pie, and from the menu photo shot I can see that it’s fully encased, so nothing left to do but dive right in.

I also decided to push the (gravy) boat out for this taste test by deciding to plump for the colcannon mash instead of trotting out to usual spawny plea of “can I have it with chips instead of mash?” while the waitress silently mouths “tosser” under her breath.

So the pie and mash is served on a long, rectangular plate and intriguingly, the pie comes in a ramekin (that’s a small dish/big ashtray for those of you unaware). The Betty’s Hot Pot style receptacle causes a brief bout of panic but upon further inspection I peer in and see that, yes – it is fully encased and it can easily be extracted from the little dish/big ashtray in which it arrived. Thus enabling me to actually eat all the contents of the meal on the same plate, no mean feat in these times as followers of We Want Plates are no doubt acutely aware.

The separate gravy is pleasant and rich while the mash is distinctly cabbagey but what to make of this double, triple, quadruple etc etc award winning pie?

Well I found the shortcrust top crust a little bit on the heavy side, setting heartburn alarm bells ringing all over the shop but nevertheless it had a good texture to it. Inside, the meat varied in size and chewability but generally seemed to be of decent quality. There’s a few onions slithering about in there, jostling for space and the internal gravy is again high quality, whilst only giving off the occasional wave of red wine in the mouth.

The whole meal didn’t feel too overwhelming when it arrived on the plate yet I found myself having to pause for a breather on one or two occasions as both pie and mash were indeed highly filling. Sometimes with these kinds of meals, they might plop a whole load of other veg and salad garnish on the plate but this was neither present nor necessary. 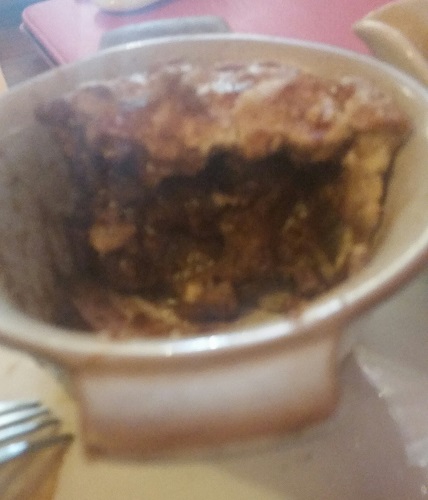 The pie was simply all about the steak, with some very large chunks in there greedily devoured by my good self.

The Steak and Merlot pie cost £8.95 and the service in the pub was excellent, a girl called Nicole tended to our every need and even turned a blind eye to me continually attempting to take wobbly photos of the pie with my phone like a dickhead.

Definitely a place to go again, albeit preferably not the day after Haydock Races next time, as racegoers had emptied the place clean out of alcoholic beverages.

The pie, well despite some concerns about the top crust, it was indeed a cracker. I’m not about to concur that it is the best in the country though, I suspect it would fall down in a taste test when compared to Pauls’ Pies for example in the gourmet steak pie stakes.

For me, it was the chance to finally get my hands on a pie which had evaded me (and continues to do so on Wetherspoons menus to this day). Tasted great, very well filled, not a lot of smell coming off it but piping hot inside.

The Dunkleys range also includes a Chicken & Ham and Chicken & Mushroom variety along with a Beef & Ale. If you want to know where else they are sold then good bloody luck with that. Try their website. Or maybe ring them up. Tell them Martin sent you and cover your ears when the resultant scream hits the phone line….

Life of Pies is a light hearted travelogue in search of the perfect pie featuring 314 pies for just £9.99 plus p&p. You can get your teeth into it by buying a copy from the Pie Shop