One hundred days of pie: No.9 Walkers Fluted Pork Pie 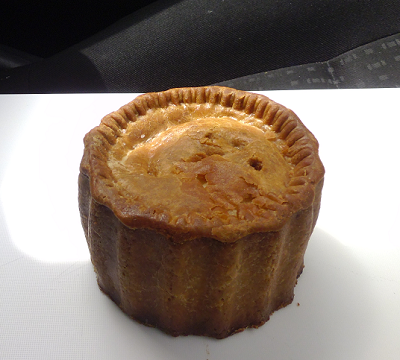 Did you know Walkers made pies before they made crisps? If so, you’ve probably also been blagging info off Wikipedia like me.

Originally a butcher in the 19th century famed for pies and sausages they started to use the surplus fat off the meat to make potato crisps during the war. Seventy years later ol’ Jug Ears get paid a small fortune to advertise said crisps on the telly.

The Fluted Pork Pie is on sale in the deli aisle at Tesco and “fluted” essentially means that the side of the pie is ridged as if it’s been cooked in a cake casing. The crust is moist on the verge of being greasy and I found the meat very pleasant which isn’t always the case with some of the coarser efforts coming out of the Melton Mowbray region.

I think I got this one on my dinner hour and at £2.75 for a family pie, I was only meant to eat half but needless to say I devoured the lot and returned to the office woozier than a sailor on home leave.