One hundred days of pie No.50 Grasmere Farm Steak Pie

At last, 50up! This is still under 16% of the pies featured in all their glory in the Life of Pies, magnificent value for under a tenner.

Ahem, anyway towards the end of the book, I started to get a few recommendations coming my way, one in particular came from Mudhutter’s very own Orrible Ives who had recently decamped to rural Lincolnshire.

On a brief reconnaissance back to home turf, I met him in the car park of The Crown Inn at Worthington, itself a fine creator of home baked pies.

Shit just got real. Handing over suspicious packages through car windows on pub car parks. Yes that’s right – a large plate steak and ale pie from one of his local haunts and a large block of Haslet. Whatever that is. It looks like drugs and knowing Ives it probably is.

Turns out haslet is pork meatloaf and this greasy, sweaty little bundle got carved up and slapped straight on my butties in the morning. It is served and eaten cold, as indeed most things appear to be in that neck of the woods presumably because they don’t have microwaves in farmers fields.

Anyway, back to the pie and although Ives is a good mate, a great footballer and legendary raconteur, I wouldn’t trust him as far as I could throw him at times. So when I pulled this bin lid sized pie out of the oven after a good forty minutes and cut into it, only to find the meat looking kind of red-dish, I was left to ponder “what the hell has he given me here”.

He said steak and ale but maybe this was some *other* kind of meat prominent in Lincolnshire, if not Royston Vasey.

A classic Ives prank to send me a pie full of donkey meat or something. Unfortunately, my suspicious nature backfires spectacularly as Ives texts me to ask if I liked it. “yes, the meat was great – what was it?” 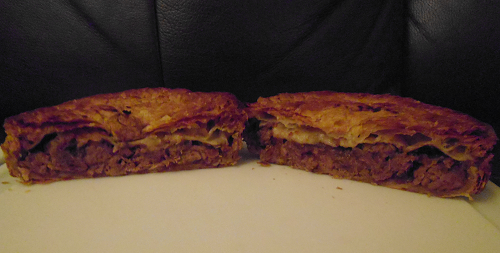 The answer was rare Lincolnshire Red Beef, specific to just a handful of farms in the Fenland areas. Yes, I know what an ungrateful bastard I am. I told you, Ives was a top lad!

And with that cleared up, this was a humdinger of a pie with more meat in it than a Desperate Dan cowpie and ridiculously overfilled with premium and indeed rare steak meat. Albeit this was probably a pie to feed a family of four served up with veg and a gravy boat, as I was dining solo no such accompaniment was needed. 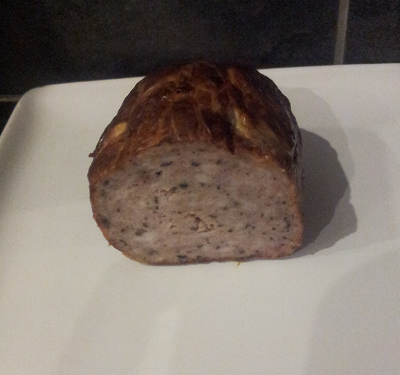 Coming soon Numbers 51 – 60  however, I will be tied up on a bit of top secret pie eating business over the next couple of days.

No.46 The half and half pie

No.47 Greenhalghs Steak and Ale Pie

No.48 Lord of the Pies Stockport Pie