One hundred days of pie: No.46 The Half and Half Pie 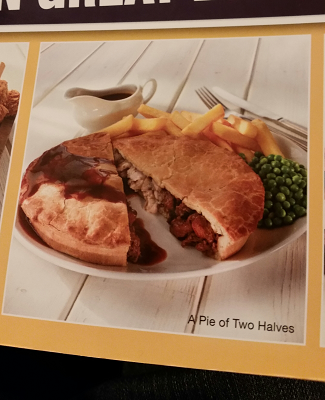 I have pastry based responsibilities within the community to fulfil you see, so all thoughts of an XL burger with a stick through the middle and a totally untouched pot of ‘slaw on the plate were cast aside. Who decided to start calling it “slaw” anyway? It’s despicable behaviour, whoever you are.

The Charnley Arms by Junction 27 of the M6 is part of the Fayre & Square chain, for whom a friend and family has recently passed us some 33% off vouchers, meaning that I can quaff pints of industrial strength San Miguel for a mere £2.40 and wonder the next day why a large part of my brain appears to have gone AWOL.

Anyway, to the pie and with the pub being exceptionally busy there was a wait for both a table and the food but the duty manager was dead nice to my hyperactive three year old, giving her crayons to draw on the table with.

When the pie it arrived was nearly as big as the table itself with just enough room to fit a stack of chips, peas and a jug of gravy placed precariously around the perimeter of the plate.

I knew what I needed to do here and there appeared to be a score mark on the top crust to guide me: I wanted to cut the pie directly where the intersection is leaving the chicken and mushroom on one side and the beef and veg on the other. Because despite my interest in having a “half and half” pie, naturally my first job would be to separate the fillings, because that’s the way we think right? 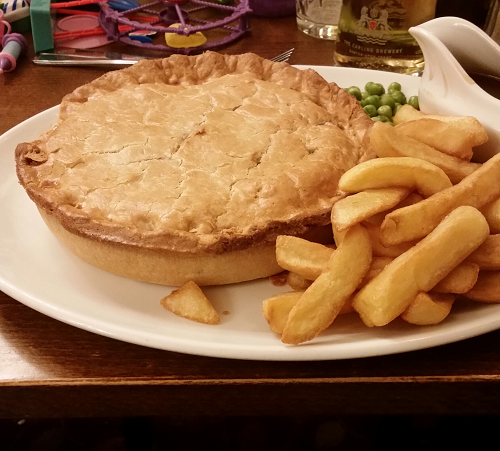 Sadly Lady Luck wasn’t shining on me on this occasion and I appear to have severed into the other 90 degree cross section with the bottom of each half containing beef and the top full of chicken. Furthermore and as you can sort of see from the picture, it appeared to be more of a 60/40% split in favour of beef than chicken.

As quite a shallow plate pie it was difficult to inspect the filling without ripping the crust apart and giving it a sun roof but the filling in the chicken section wasn’t too mushroom intense – good, because mushrooms are wrong and the veg in the beef and veg seemed to consist mainly of sweet, gravy soaked carrots. 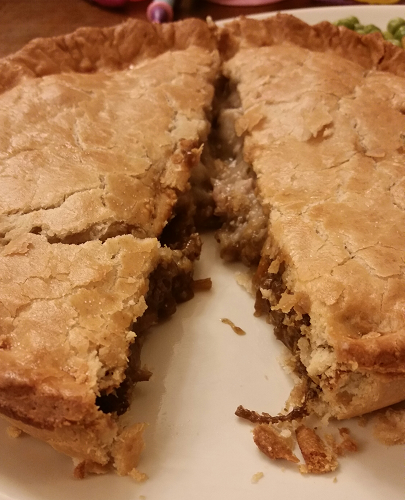 The chicken filling also possessed a delightful peppery kick to it, something I rant about at length in the book. I’m not sure it’s as big a thing further afield but the peppery pie is a joy to behold, be it the meat and potato of Lancashire or the hot pork pie growlers of Yorkshire; even if it was traditionally used to disguise the taste of cheap meat.

The pie was fully encased, always a welcome surprise given so many pubs seem to think a pot of filling with a pastry lid plopped on top seems to constitute a pie these days, and it’s diameter must have been a full eight inches. It was thick, especially at the crust rim, almost too thick, I’m still reaching for the Gaviscon 12 hours later, but as it contained two different fillings I suppose it would have to be to keep everything contained within.

It’s size presented a challenge to me, as indeed it would to most appetites. Clearly it is a pie with a novelty factor about it but it is also of huge dimensions. A hearty meal for the cold months ahead for those ladies and gentlemen who like to add an extra layer to their waistline to snuggle up to in the depths of winter.

So I had a good go at it but (bows head in shame) I did leave a few stubbly pieces of crust on my plate and nearly all the peas. I’ve nothing against peas – had they been in the pie I probably would have eaten them – I just couldn’t fit them in. The jug of gravy was emptied as well and a little more would not have gone amiss. 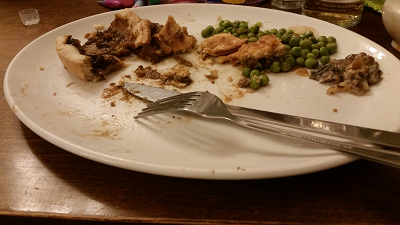 Not only have I let myself down, I’ve let my friends down and my family down…..

You’ll receive it as soon as I’ve finished my pie.