One hundred days of pie No.42: Clarks of Bristol 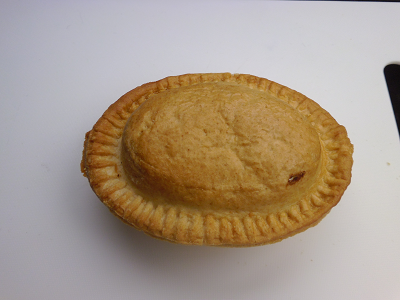 Having introduced the original Clarks yesterday, it would be harsh not to give it’s English cousin a bit of air space.

The same day I went to Cardiff, I also weaved my merry way to the Clarks pie shop in the sleepy area of Bedminster  (sorry) in Bristol. Cruising along the A5 past the Severn basin with an army of joggers and cyclists up above, down below and alongside on a glorious wintry day. Past the football ground (City not Rovers) where they have a mobile stand.

I enter the shop and a man in white overalls is serving meat and veg pies through a small hatch. Nice touch. Don’t mind if I do. This is a surrogate Clarks you see. They are as big in Bristol as they are in Cardiff but at some point a relative moved out of Wales and set up their own franchise. If such a word existed in the 1920’s.

The differences are discernible, there is more potato and onion in the Bristol version and a more defined crimp in the top crust. They’ve also added 50p to the price, although in fairness this time I am paying a “retail” not “wholesale” price.

The Bristol version is called a Meat and Veg Pie and the Cardiff one…well I bought it off a bloke in a kitchen so I don’t really know. The Bristolian Clarks is again a top notch pie, shaped like a rock cake but filled with meat and as a resident of Wigan, the supposed home of the pie it is truly inspiring to see such traditions and high regard for the humble pastry product in the South West too.

Whereas Pieminster have cornered the top end of the market in this part of the world, for good old fashioned stodgy street food capable of filling up a hungry tummy, Clarks of Bristol again deliver the goods. 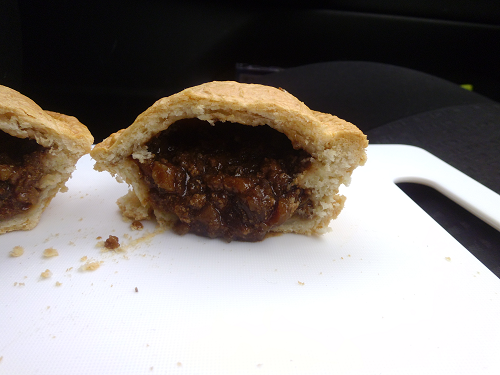