One hundred days of pie No.41 Clarks of Cardiff 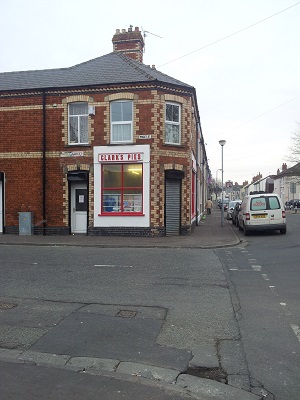 It was chirpy Bristolian Ian Holloway who first opined that Clarks Pies were one of the best things to come out of Bristol (apart from himself). However, it seems that statement was a touch liberal with the truth, you see Clarks pie originated in Cardiff and still thrive and survive there to this very day.

I took the opportunity to head west last year to understand the Clarks phenomenon. Pulled up in a working class area of Cardiff to be hit by the sweet aroma of baking and students wheeling shopping trollies back to the supermarket they carried them from on their heads the previous night just to get the quid back.

It’s half nine on a Saturday morning and they only open at ten but it does say to go down the side and ring the bell. Someone’s nicked the bell though so I just wander in. Right in the middle of the kitchen in fact. A big, jolly Welshman confronts me.

“Who left that door open?” 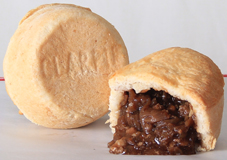 And it’s a mountain of a pie for a quid: dark, deep and devious with a dense rock shaped crust and the official CLARPIE stamp on the underside.

Not sure on the flavour as it mainly seems to consist of mince and no sooner than I have bit into it, I end up with a “Clarks tache” as they call it in these parts with peppery gravy spilling onto my top lip. Hmmmm heavenly.