One hundred days of pie No.32 Foodcraft Fish & Chips 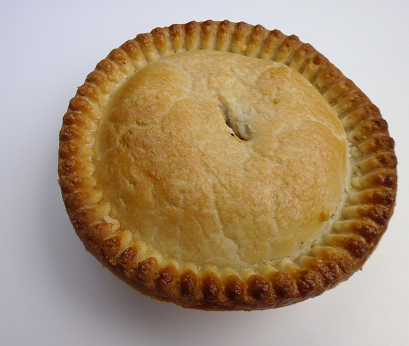 If myself and my fellow cohorts from Wigan have a secondary obsession apart from pies, I think it’s safe to say that it’s fish & chips. Open warfare and a large portion of ridicule can be thrown about on social media when it comes to debate and quality of the infamous “chippy tea”.

Indeed, Wigan is the home of the “peywet” – essentially the juice off the mushy peas and many a time as a kid, or even a wayward teenager I’d roll up to Jimmy Gray’s chippy at quarter to two trying to broker a deal to purchase a meal for ten pence consisting primarily of leftovers.

This would inevitably feature a smack (potato scallop, 6p), scraps (loose bits of batter off the fish), peywet and gravy.

If I’m completely honest, I couldn’t write a book on chip shops, simply because I don’t like fish enough. I can tolerate it, and the smell is divine when it’s battered and masked in vinegar. But when I go to the chippy I invariably have a pie anyway, or that other wonderful delicacy, the “babbies yed” aka steak pudding.

So upon finding out that there’s a chippy out there which also makes its’ own pies, then that is indeed cause for an excursion. Foodcraft is in Winsford, a Cheshire town notable for its salt mines and don’t tell the doc’ but we all like a bit of rock salt on our chips as well.

As for the pies, well if you check out the Foodcraft website http://www.foodcraftfishandchips.co.uk you’ll see that they have a fantastic range of pies with both traditional types featured such as meat and potato, steak and cheese and onion, yet they also have a range of unique flavours created all of their own. In recent times they’ve done “Pizza” pie, Turkey and stuffing and Steak and chestnut mushroom in a Pie of the Month feature.

Their website is modern and engaging yet they have been baking pies and frying fish and chips for over 50 years.

On my visit there, I found the shop to be bright and airy, with a large stack of pies in the window and a clean, spacious kitchen beyond. I paid just short of two quid for a meat and potato but I was heartily impressed with the size and declarations of high meat content.

I chose to have the pie “neat” so as not to be seduced by the addition of chips and gravy but given its ample size and the generous portion of gravy within, it’s a meal in it’s own right. An exceptional amount and quality of steak meat inside softened by the presence of fresh, fluffy potato chunks encased in a robust, thick crust which just about held together given the weight of it’s content. 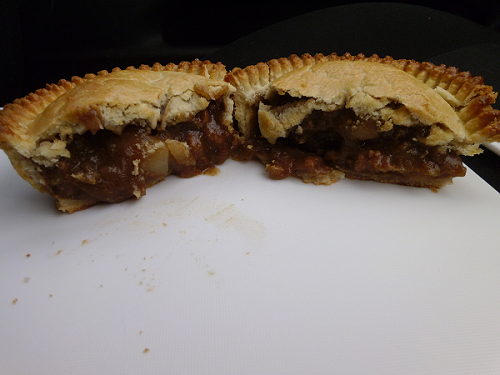 I shall return here, mark my words!

Indeed, Foodcraft were so pleased to find that they have been included in the book, they asked me to do a little blog for them about it. Click here to read it: http://www.foodcraftfishandchips.co.uk/guest-article-the-life-of-pies-by-martin-tarbuck/