One hundred days of pie No.25: Aulds Steak and Haggis Pie 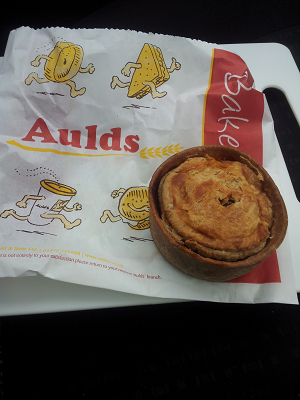 I’ve only a vague idea how this Scottish baker made it into the book. As I went on quite a direct and demanding tour over the border I was perhaps looking for a more standard chain to augment the more specific pie objectives I had set myself and I believe Aulds of Greenock Morton are one of the bigger independent chains with a presence in Scotland (excluding the ubiquitous Greggs obviously).

I had a few language barriers in this shop. I couldn’t find the pies until she pointed me to a wee tray at the end. She appeared to say they were steak and haggis or plain. A plain what? Anyway, I didn’t one a plain pie, I wanted an exceptional one! So steak and haggis it was.

It was quite possibly the flakiest pie I’ve ever had. If they re-made that Cadbury’s advert with that girl in the field, her dress would end up covered in pie crust flakes. But would she be licking her lips?

Er….possibly. I found it passable, if a little dry in parts. The haggis was not too dis-similar to black pudding and its presence neither offended or excited me. But you can’t go to Scotland and not eat haggis can you? 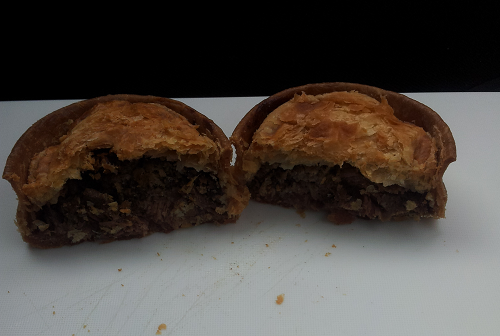