New pies at the home of Crusty the Pie

Regardless of my views on the selection of caterer for pies at the DW Stadium, home of Wigan Athletic and Wigan Warriors, there is a new pie supplier providing hot pastry products to sports fans of Wigan and visitors far and wide.

The carefully chosen vendor is Clayton Park of Accrington, you can check out their produce which sits at the creatively chosen URL of www.pietastic.com.
East Lancashire is something of a hot bed (or hot oven if you prefer) on the pie making front with ubiquitous chip shop giants, Hollands, also situated nearby. Neither of them are from Wigan though. More on that later, but first the pie.

I’ve had Clayton’s before and they are a good, solid pie. The meat and potato is generally a good all rounder, with plenty of content, flavour and a reasonable size.
Upon approaching the kiosk and perusing the options, they also do the Lancastrian speciality, the Butter Pie, which will delight my fanzine co-editor, Migs.

This made me mad. Peppers, be they red, yellow or green are very healthy, but (in my opinion) they have no place in a pie. Pies should consist of earthy, comfort ingredients to represent their working class roots, not healthy food.

Peppers are part of a salad. Would you buy a SALAD PIE?

Of course you wouldn’t. Case closed.

Anyway, they may have changed the recipe so I’ll pipe down.

They also do a chicken Balti. OK so peppers may be acceptable in this, and I can’t remember if they do or don’t, so I will have to review but it will have to go some way to beat the Chicken Balti pie of the previous supplier (Wrights), which was a fine pie amongst an average bunch.

I don’t know what other pastry products they sell and nor do I care, because you have a pie at the football, nothing else is allowed.

So I get a prompt, smiling service and I am presented with a hot foil tray pie covered in napkins, straight out of the oven. I can’t confirm whether it presents with any distinct smell as the whole concourse smells of pies (and of course, imminent despair and disappointment, this is a Wigan Athletic game after all).

The cost is three pounds, and scandalously at the match, I tend to use a fork rather than hands.

It is, as mentioned very Lancastrian in style, a moist, sloppy filling, with slabs of potato and ringlets of mince in a mushy gravy, which also has a few onions in it. Not too peppery or seasoned, allowing the natural flavour to flow through. It certainly filled enough of a gap in my tummy to cover the absence of tea at a night game. 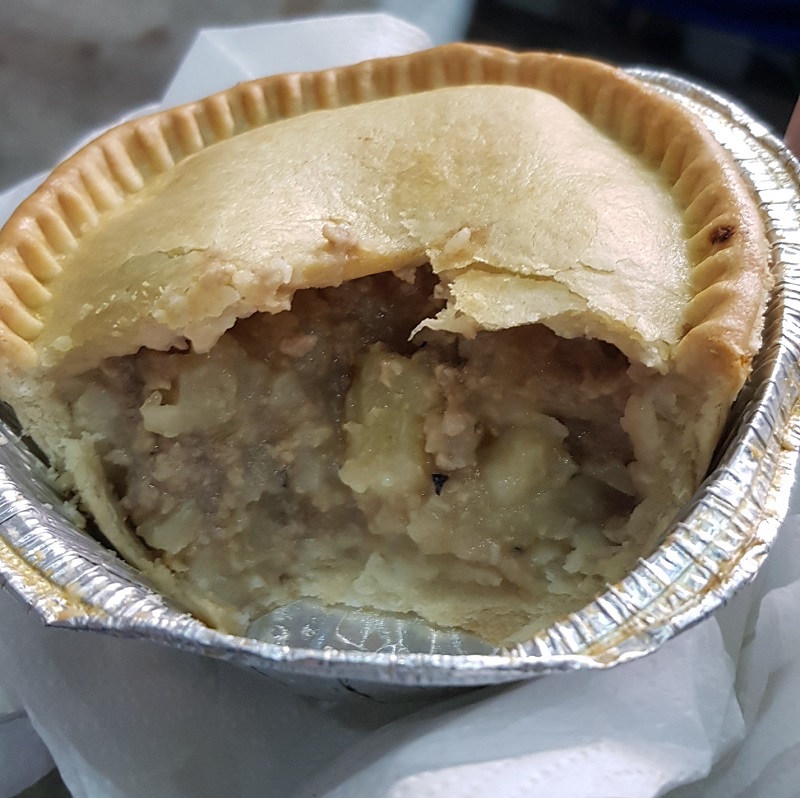 Total score: 53/70. Obviously value has been marked down a bit due to football club pricing and the fact you can get the same pie albeit cold from Spar for about a quid. Even so, it was decent but didn’t blow me away. Something that you might think the powers that be at the DW Stadium might consider when choosing a pie provider, given that Wigan is the home of F*$^*%^£ PIES!!!

Let’s save that rant for another day then….

The match finished Wigan Athletic 1 West Brom nil, my pre-match prediction of 0-8 to the visitors, being slightly off the mark