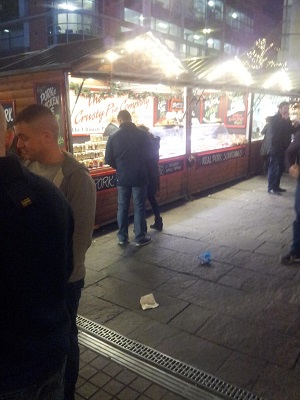 Unlike Mariah Carey, all I want for Christmas is to go to Newcastle. It is my last port of call before shutting down the book. I have it all planned out with military precision exactly where I need to go and what I will have at what time. Alas, I’ve been unable to find a day to do it in so I consoled myself last night with a beer or two in the German Christmas markets. Then I saw the pie stall….

Hosted by the Crusty Pie Company from Halifax, they had pork pies, pork and apple, pork and stilton, the obligatory turkey and stuffing pies, pies topped with cranberries; festive beef with horse radish sauce – is there only me who finds the name let alone the taste of horse radish a tad disturbing – a six pound (price not weight) Boar pie – a growler which probably really does growl at you and a chunky Steak and Yorkshire real ale pie. The chilli pork scratching caught my eye as well and they had a selection of Indian food on top of the display counters as well.

At £3.50 each or 2 for £6 it wasn’t cheap and it’s difficult to know how much of the price is inherent and how much is down to the general mentality of ripping off Chrimbo punters at the Manchester Markets. As everyone knows those £4.00 pints of German lager (plus £1.00 glass deposit) are actually just a can of Aldi’s own brand Stella “Saint Omer” poured into a pint glass.

Still it has a hefty weight to it, slightly larger than an average single pie and given the vast difference in quality of steak meat around it still has a lot of potential. The crimp is firm and rigid and a solid crust, as you’d expect of The Crusty Pie Company. However, on turning it underneath there appears to be what looks like MOULD. Now I’m not going to get carried away before it goes into the oven as very often pork pie jelly can seep through and take on a greyish appearance on the crust contour so I may have got it wrong. Either way, at £3.50 a pop there’s no way it’s going in the bin so I bang it in the oven for twenty minutes at gas mark five. 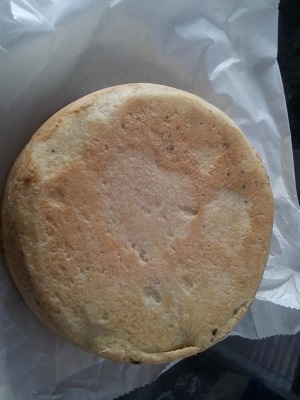 In the oven it gives off that slightly lardy pastry whiff but the meat and gravy remains a guarded secret tucked within it’s pastry casing.

Upon exiting the oven and burning my hand as per usual, the crust sides have sagged a touch, a sure fire sign that’s there’s plenty inside. I lift it up to check and yes the little black dots are still there but all is forgiven upon opening up this beast and finding that it is darker than the Milk Tray man’s polo neck; densely packed with sumptuous looking large chunks of meat and dark gravy. 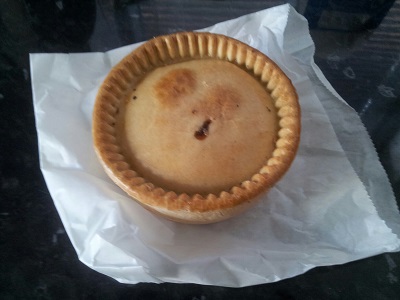 Service 6 She sounded German and a tad disinterested
Filling 8 absolutely heaving with stewed steak meat with an above average chunk size, perfectly complimented with rich gravy and savoury, spicy jelly
Crust & Pastry 8 the crust is more crispy than crusty but is sturdy enabling perfect portability of the pie with the hands
Taste 8 possessed a remarkable kick traced down to the jelly and gravy which attacked my tastebuds with considerable aggression and put my earlier concerns firmly to bed
Value for Money: 6 at half or even a third of the price this would be an absolutely steal for a lunchtime on the move pie but it appears to have been priced with the gourmet palate and is more of a “Terry taking a break from plastering the walls to read the Mirror, have a mug of tea and chomp on a steak pie” feel to it
Size 8 a good inch and half deep I am pleased to report
Warmth/Smell 7 the smell doesn’t quite overcome me throughout save for the pastry glaze but after cutting it open steam flies off in all directions like a Pearl & Dean advert.

OVERALL: Despite some early concerns about pricing and freshness the Crusty Pie Company Steak and ale pie attacked my tastebuds with considerable aggression and left my appetite feeling decidedly satisfied. Score an impressive 51/70.

The above are notes from a forthcoming book available in Summer 2014: Life of Pies.

Pre orders available from here in the New Year