Back on the pie trail: Greens Cheese & Onion 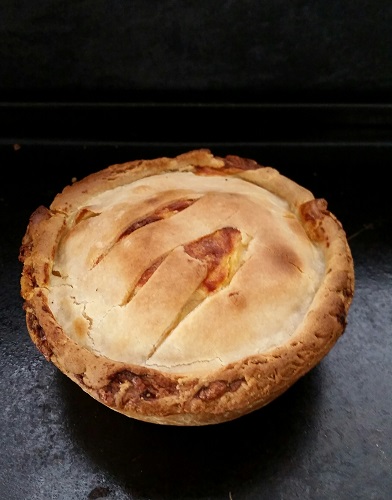 A familiar establishment but a pie I’ve never tried before from there. It’s a cheese and onion pie from Greens which I think cost around £1.50.

If I’m honest, I didn’t taste and review anything like enough cheese and onion pies during the making of Life of Pies. The main reason for this being, I love meat! Ahem. Indeed, who doesn’t love meat?? Yes, OK thanks – vegetarians! They don’t.

The pie is of a hefty size and dimension, it has a wonderfully thin top crust which nevertheless manages to retain a perfect balance of soft yet slightly crisp texture. Yet it is also backed by a rugged outer crust rim which gives you something proper to grab hold of as well while the base is uniform and sturdy.

Upon cutting the pie in half, it is still perfectly portable and filling wise, the colour palate within is a joy to behold with delightfully moist looking yellowy orange sloppy chunks of cheese teamed up with a few subtle traces of lighter coloured onion.

The depth of the pie makes it a little difficult to get my mouth around but this is by no means something to complain about. I always had cheese and onion pies down as being either fey little things on an individual level or larger, thin plate pies usually sliced up and served as portion. This is indeed a large pie and a large portion, yet as a deep as a bathtub as well.

The cheese is full flavoured but not completely overpowering which is probably the best way to be: it frequently takes you to the edge but never quite pushes you over it on this cheesy ride of adventure. 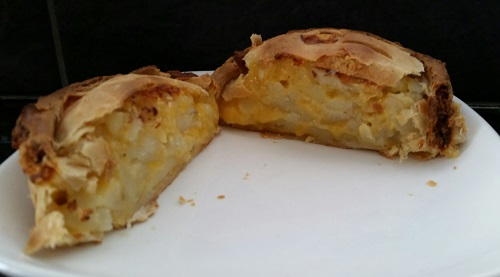 If I was scoring this pie this is how I’d mark it:

Place 9 every time I come up to Greens I’ve been overwhelmed by the warmth, not only of the pies but of the staff, customers and indeed the people of Barrow-in-Furness in general. And as I found myself up there for a special reason (sssh!), it was all the more welcoming.

Pastry 8.5 a finely shaped specimen which holds together well throughout proceedings

Presentation 8 gave off a lovely whiff in the oven, you certainly know there’s a pie in there, as do the neighbours

Package 8.5 Stand down, trades description officer, this has lots of cheese in there of at least two varieties plus just the right amount of onion content

Price 8 Retailing at £1.50 this is a big old pie and whereas you could conceivably eat two of them, one is plenty unless you have designs on having an afternoon nap

Overall, an exemplary 60/70 as Greens strikes again. There’s still quite a few left to try from the Greens range including the intriguing cherizo (yes cherizo!), but fortunately we’ll be up there again in a few weeks, not that the missus knows it yet. This time we WILL take the little rowing boat across to Piel Island for a pint in the pub and a walk around the castle. Not that she knows that either. 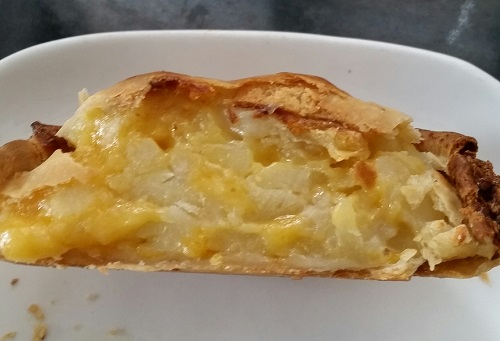 There are 314 pies featured in Life of Pies, a pastry based travelogue in search of the perfect pie. The book is available for just £9.99 plus P&P at www.lifeofpies.co.uk/buy