And so it begins…… 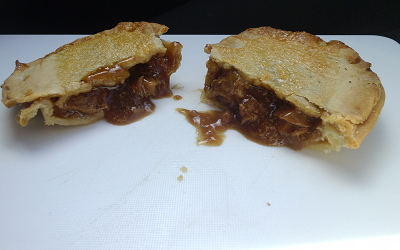 The following article appeared in the Wigan fanzine, The Mudhutter a few weeks ago and explains how the “Life of Pies” began and how the author hopes to use the latest craze of “Crowd Funding” to help fund the printing of the book.

Left: A steak pie from Philippes of Skipton

A new year always brings new aims and ambitions. By day I work as an accountant but in my spare time I co-edit this Wigan fanzine with Migs and I have previously had two books published about football. In January 2012, my football team was a bit shit if I’m honest and my mind started drifting elsewhere.

I’ve always liked my pies as many Wiganers do. I tend to spend a lot of time sparring and joking about pies with fellow football fans from across the country on twitter and such. We do play up to it a bit don’t we in Wigan? I think it’s fair to say that when someone puts a picture of a pie on the internet I reach a state of semi-arousal. It’s even got it’s own Twitter hash tag #pieporn.

I had a troubled 2011 – I lost my job as many others did – indeed I did again in 2013 (different job) four days before I was due to go to Bruges. But the thing was on both occasions, I knew it was coming for several months. In the Summer of 2011, I had worked my bollocks off for the company but once I knew the writing was on the wall, I started to find a lunchtime hobby to take my mind off things. I started to actually leave my desk and go and have a lunch hour touring the streets of South Manchester in search of a decent pie. It became something of an obsession: you must be able to get a decent pie around here right?

Of course, there was a Greenhalghs in the centre of Didsbury where I worked, a good solid pie producing stalwart; and a Greggs across the road, another big hitter in the pastry world. However there’s no fun in that, you can get their pies in Wigan. I was looking for something different, something special, a truly great meat and potato pie which had been kept secret from the world even though locals would queue out of the door with a knowing nod. A hidden gem which would blow my socks off.

I don’t hold out much hope finding it in South Manchester, although the Morrisons in Stockport produced a proper belter of a pie from beneath it’s hot snacks counter. I’ll go back and review places again though, with an empty stomach and a clear mind.

This is no secret obsession either: I’ve worked outside of Wigan for many years and people know about the Wiganers’ addiction to pies, it’s a nice little ice breaker. I have no qualms when meeting new people or arriving in a new place asking them “where can I get a decent pie from around here?” and I know I’m not alone. The quest does not just end in Wigan either – it’s a national obsession. And without offending 50% of the population, it’s fair to say that men like pies wherever they are from; I think women do too but perhaps not as much, or at least not in the same sad, anally obsessed way us blokes do. It’s like a pair of trainers, a pint of real ale or some nice socks – we love the thrill of finding something new and different don’t we? 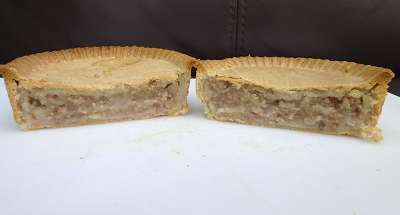 I must have had hundreds of pies at hundreds of football games over the years and it’s a staple diet of a football fan and essentially, it’s a good, honest, working class feed. But Wiganers are a bit different as we’ve established.

When I asked around in South Manchester ‘where ‘s the best place to get a decent pie from around here?’ I was, incredulously, directed to a restaurant. Where you sit down and eat a pie, with a knife and fork and probably some assorted chips and veg while a pleasant young geography student takes your order. I cannot tell you how much this formality appalled me, and I’ve still not been to said establishment. Although I’m told there is a vegan store opposite so the mischievous side of me wanted to pick up my pie and wander around the facing establishment eating my meat feast while repulsed vegetarians looked on but I’m just being a little shit there. Pies are pies and if you’re a veggie – well you can have a cheese and onion so you don’t HAVE to miss out.

There has to be a line drawn somewhere though. My original mission, which clearly I have chosen to accept was to produce a literary review of around 200 pie shops across the country, almost a “Good Pie Guide” to sit alongside your “Good Beer Guide” on the bookshelf so wherever like minded souls should find themselves in the country, they can seek out the finest pastry products a chap can buy. Or lady. Damn I keep missing that bit! It’s not intended you know: women eat pies too. it’s at 400 now and I’ve stopped.

I’d walk into a shop, buy a meat and potato, take in what I can see, take a photo and then review it. The output being a book that like minded folk can dip into and if they should happen to find themselves in an urban conurbation somewhere, they can seek out a treasured back street baker, or alternatively just get the inside info on whatever High Street chain of bakers dominates their town or city centre.

It’s a first pass of course, I can’t visit every pie shop in the country. It would take forever and I’d probably die trying, I’d lose my job (again) and my wife would divorce me. But give me a year or two and I reckon I can get around most parts of this fair isle, tuck into to some hardcore pastry and give my expert opinion on it.

I’m clearly not an expert on pies though, I’m just a fan. There’s a big difference. There’s been books written on pies before but they’ve been done by chefs and food critics. Never has a book on this subject been written by a complete numpty.

So here I am in April 2014 frantically writing up the aforementioned “Life of Pies”. I’ve nearly been mugged in East London, driven down the tramlines in Fleetwood, got attacked by geese in Melton Mowbray and eaten horse, rabbit and bollocks knows what else. Well, bollocks actually. I’ve broke three phones during the process and been from Loch Lomond to Land’s End seeking out the finest pastry products the country has to offer.

I now have a favour to ask dear reader. I have given up my spare time for more years than I can remember producing a print fanzine because it’s something I truly believe in. The printed word is something I value and cherish and you have forked out your hard earned to read this I am kind of hoping that you feel the same. I am in a fortunate enough position to have a good reach of readership with this fanzine and just for once, I’d like to abuse this power.

The trouble is that there is a financial risk with printing something, a problem that simply doesn’t exist in today’s digital media age if you choose to do a blog or online magazine and it’s no surprise to see more and more top fanzines now going digital or even digital only. Of course more books are now being sold on Kindles than get bought from bookshops now so I may well have been a little bit foolish. 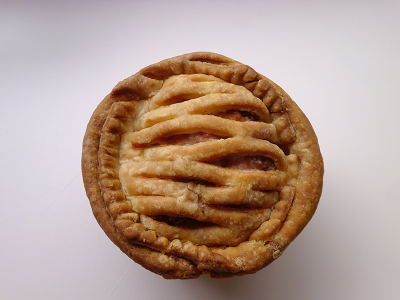 Being a naive old romantic, I wanted to do this book in print because it’s what I believe in and will be doing a print run of around 1,000 copies which will cost nearly [figure deleted in case the missus is reading] It’ll be a few thousand quid I’ll say that much.

Left: Pork Pie from Eagles (the deli in Banbury not the American rock band)

I hope to cover this by advance sales and the book is available to buy from the Life of Pies website now. I was hoping to get 100 people to buy it up front in return for them getting a signed copy of the book with their name in it before it hits the shops. Crowd funding they call it these days.

In truth I shifted 25 in the first few days to some brilliant, kindly souls who like what I do and all of us at Mudhutter do but it’s ground to a halt a bit since. Believe it or not, when I’m not stood on the bridge pre-match flapping away I don’t like mithering people to buy stuff.

So here is a little plea in print from me to you dear Mudhutter reader to invite you to buy a copy of my new book. The first two books I did Let’s Hang On and Pies & Prejudice (with Vaughanie) where when I was a young (ish) single man. As a family job with a little one, a mortgage to pay and a job to hold down and the fanzine commitments I have already, this project has half killed me so it would mean the world to me if a few readers went out and bought it before it goes to print at the end of May.

So now you know the background to it, elsewhere you’ll see a plug for the book and details of how to buy it. If one or two of you might consider investing a tenner in a copy I would be eternally grateful.

Oh and just one final thing: DON’T EVER, EVER LET ME DO ANYTHING AS STUPID AS THIS AGAIN

Life of Pies is available to pre-order here