This is the bit that I suppose I should have put in the book but to be perfectly honest I talk about myself and my escapades enough in that to indulge in any kind of formal introduction. Plus I’m the shy and unassuming type. So what do you want to know……..?

My name is Martin Tarbuck. I’m 40, er 41, and I live in Wigan with my wife and three year old daughter. The pair of them are as high maintenance as a fleet of vintage cars but secretly I like that. I consider it my penance for the only child selfish streak which has dominated the early parts of my life. 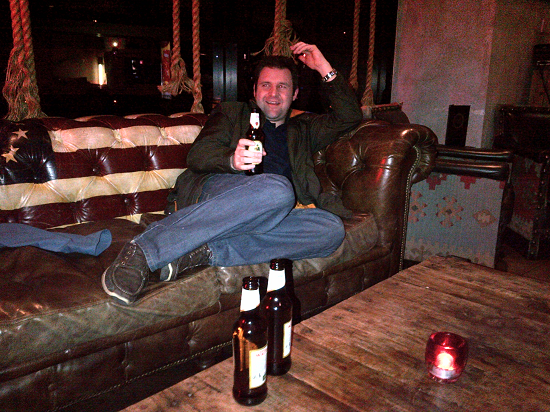 By day I’m an accountant and I work damned hard (albeit by my own admission). In my spare time I am one of the editors of the critically acclaimed football, lifestyle and culture magazine The Mudhutter. I have also been known to do a spot of freelance football writing and I have contributed to many magazines and websites over the years.

“Life of Pies” is my third book after my Wigan Athletic based football diaries “Let’s Hang On” (Mainstream Publishing, 2003) and “Pies & Prejudice” (Mudhuts Media, 2005, co-written with Andrew Vaughan).

I’ve actually got another half a dozen half written books knocking around somewhere which may well never see the light of day. So the fact that Life of Pies has actually come to fruition at all is something of a modern miracle. The swimmer that made it all the way to the furry womb of self-publishing if you will.

My writing influences include the anecdotal, conversational styles of people like Bill Bryson and Danny Wallace along with a host of fanzine contemporaries from across the country whose raw, home grown efforts I admire every bit as much as the more mainstream authors.

I’m not a massive reader though purely due to lack of time. Writing is my passion.

However, if I’m absolutely truthful I’d say that pulling together “Life of Pies” over the past three years has been the hardest thing I’ve ever done. Like most people I work longer hours than ever and unlike my previous two books I have a young family to support. But then there’s no point taking part in life if you don’t try pulling off something daft once in a while.

Why write a book about PIES? Well, why not! There’s plenty of thoughts and conspiracy theories within this blog as to why I’ve gone down this lardy route but I suspect the simplest explanation is that I started something and then kept going.

I will happily admit that I have a very compulsive, obsessive nature along with a keen eye for detail. A desire to find answers and bring order to unstructured things coupled with a writing style very much based on observational humour whilst emptying my head of life’s subtle nuances.

Beyond that I’d prefer to let others be the judge and the only promise I can give to those people who choose to buy my latest book is that I have put my heart and soul into it.

Phew, that was hard work. I did however want you to know that there is a person behind this literary attempt; and every time an email comes through to tell me that a copy of Life of Pies has been sold, I get a little leap of delight inside. It makes a real difference when someone is prepared to spend money on what I’m trying to do.