The beauty of my extensive research (2012-present*) is that whenever I find myself in a foreign town, I always know where to sniff out the best pies.

(*though if truth be known, like most Wiganers, I have been sampling pies for as long as I cut my first teeth)

So it was that after finishing a 10k in Lancaster in a respectable 47.06m, I needed to rebuild my carbohydrate store.
What better place to go, than an old favourite in the form of Potts Pies of Lancaster, Morecambe and Carnforth? 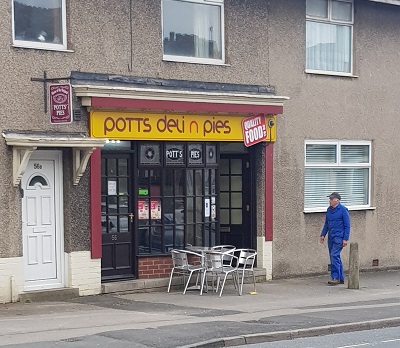 On my way out of the grand city of Lancaster, I drove up Bowerham Road and was pleased to see their premises intact and open for business. I detected a bit of a redecoration, with the stained glass façade gone and a large sign above the door featuring a rebrand to “Potts Pies and DELI”. DELI???? DELI!?! Sign of the times I guess, literally.

I decide up front that, having reviewed their fantastic meat and potato in the past, I’d go for a chunky steak this time. Only to be told there’s only none left! It’s only 12.30pm, and I must admit the veggie options don’t really appeal to me, so I go back on my word and pay two English pounds for a hot meat and potato pie.

PLACE: Pleasant enough staff and there’s, still that wonderful earthy baking aroma floating about outside drawing me to it like a kid on the Bisto ads 7

PRESENTATION: A wonderful smell emanating from the pie makes up for the slightly tardy service and the pie comes sans foil tray. I note they’ve done away with the free samples of pie on the glass counter since my last visit too, although a piece of cold broccoli pie was hardly going to entice me into further purchases in the past anyway. 7.5

PASTRY: First a negative, it does fall apart a bit when I lift to put it into my mouth. However, this is more than offset by the beautifully reassuring crack when I bite into the outer crust, which is as crunchy, as the centre is soft and doughy.
The pie is nicely glazed on top and has a lovely sheen to it, there’s a few holes in the top but not much in the way of boil out. It is even throughout and the base doesn’t look burnt. Look at all these extra things, I’ve learnt to check for after several years judging at the British Pie Awards, rather than just lobbing it all straight in my mouth! 8

PACKAGE: It is an exceptionally well-filled pie, bursting at the seams, in fact with hefty yellowy stock soaked potatoes with chunks of mince and gravy wedged in between. 8.5

PALATE: aka Taste. I never thought I’d say this but perhaps there could be a little too much potato in it and perhaps it does verge on tasting a wee bit bland at times but every now and then that splendid peppery kick comes through, which lies at the very core of a quintessential meat and potato pie. 8.5

PORTION: It is still a very big pie, even if to my mind it seems to have gone a little bit smaller. Don’t get me on an “Ooh everything’s smaller these days isn’t it” type rant – aka The Wagon Wheel syndrome. Could I tackle two in one sitting? Of course I could, but I’d need a mid afternoon snooze afterwards. 9

PRICE: I used to declare two pounds as a rip off for a pie, it was that watermark, like the £2 pint. Or the FIVE POUND PINT as it has now become. Probably a TEN POUND PINT in that London, but I digress, that was five years ago. It is a decent sized pie, which I’d give 7.5, but let’s call it 8 with inflation.

OVERALL: Well, I’ve just done the consistency check, given my new harsher judging credentials and checked the review I did just over six years ago. It has lost a couple of marks but it would still represent one of the top ten meat and potato pies I’ve had and somewhat bizarrely, the price has reduced from the £2.10 I paid in 2013. 56.5/70 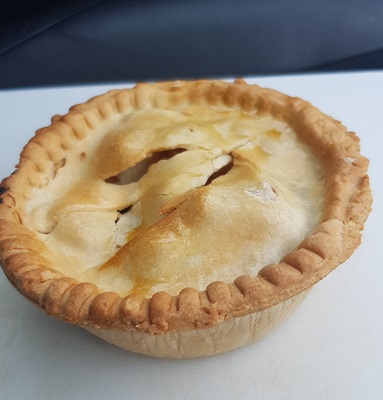