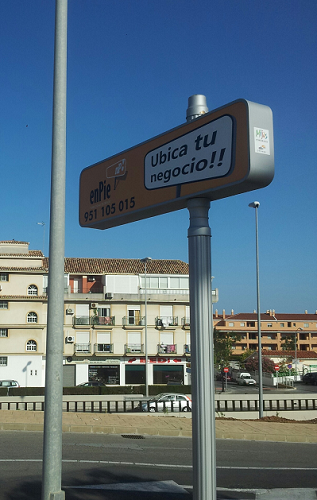 The significance of the number 97 has nothing to do with quantity of pie consumption I’m afraid it is a simple tally as to how many advance copies of Life of Pies have been already pre-ordered by some wonderful people.

As the May payday came and went, a significant number of generous people put their hands in the pockets to buy a personalised copy of Life of Pies putting me within touching distance of my initial target.

Since then, things have dried up a little mainly as I’ve been concentrating on getting the thing finished and then I’ve been out of the country for a week*

*In answer to your question, this top crust Steak & Guinness Pie from Henry’s Bar in Costas Mijas was the best I could find. Top Crust only = instant referral to dubious pies panel. It wasn’t bad though.

But now I’m back with one last push…..

Let me state here and now: I was meant to finish this book last March. Then last Summer. Then I gave up on getting it out in time for Christmas.

And I was only meant to be eating 200 pies. Not 400. Pies are addictive business.

Yet now the finished article is tantalisingly close.

The 97 people who have already invested their hard earned £9.99 know this already due to my regular email updates. 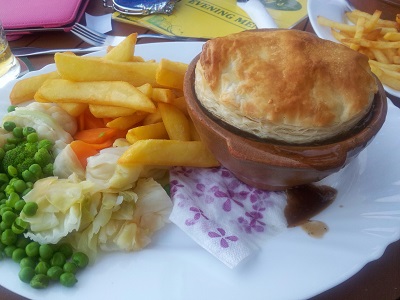 The first 80,000 words have gone off to my designer Andy Greenhalgh for final layout.

Back to the target and I initially hoped to shift 100 copies in advance to help to fund the cost of printing the book.

In truth each key milestone attained has been a delight and as soon as I got past 20 and then 30 I felt a sense of pleasure and relief that people are supporting my writing.

Hitting 50 through to 90 last week now brings me perilously close to the target and whereas I’m desperate to hit the various social media channels and scream BUY MY BOOK PLEASE PRETTY PLEASE! I ONLY NEED THREE MORE OF YOU!! I will resist that temptation

You see I’m a little too reserved and laid back for that, plus I hate it when people spam the internet with the same old thing on an hourly basis. Less is more sometimes and I feel guilty enough for mithering every couple of days.

The target of 100 is exactly that: a nice generic round numbered target. 100 books sold will cover around 25-30% of the cost of printing the book, meaning I don’t have to fork out the full cost myself.

Indeed, there’s a magic number somewhere between 145 and 150 which would cover the 50% deposit required the day the book goes off to the printers but I fully expect to dip into my pocket for a few hundred quid in the short-term to get this thing over the line. Hey if I don’t believe in what I’m doing why would I expect anyone else to?

I do feel cheeky asking for people’s money up front but crowd funding is a popular way of doing business now and to give you some idea of the impact this can have: whereas individually people have only invested a tenner, collectively the sum is now nearly £1,200.

It turns ideas into tangible outputs.

Having a thousand pounds sat in my bank account leaves me feeling all warm and fluffy at times and surreptitiously a bit of an untrustworthy bounder at others. Call it Catholic guilt even though I’m not Catholic and barely religious.

However in a couple of weeks when I send this book to the printers I will be required to fork out a couple of grand and every time somebody goes out and buys a book that blow to the wallet gets softened further.

There will be 1,000 first edition copies printed this year by the publisher (me)

The first 500 sold will cover the cost of printing, postage and paying the designer

The remaining 500 might start to cover the cost of the thousands of miles I’ve travelled and overnight stays I’ve done researching the book, not forgetting the cost of the pie themselves: over £1,000 at current estimate.

Yeah you’re right I suppose – as I ate them all that doesn’t count does it?

I’m an honest and transparent type of chap and wanted to make that clear you see. 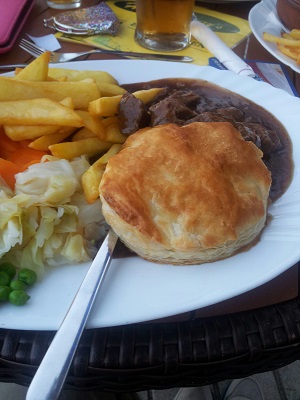 Henry’s Pie: One for the pie committee to chew on and spit out with discord I’m afraid

That might be the end of it or it may not. A publisher or a retailer may take an interest in it and it may go further. One or two have expressed interest along with a few media outlets but it’s not my priority right now. That might change but for now, the plan is as above and nothing more.

I’m doing nothing more aspirational than reading my Writers Yearbook with a marker pen so that I know how to write a synopsis and am aware of current trends. Lesbian fiction is huge right now but that would be a bit too much of a re-write I reckon.

I’ve dealt with national publishers before and found it a little unrewarding and fruitless so if anything did happen it would be on my terms and by being open and transparent to you, it hopefully exhibits already that what I am doing is a time consuming highly committed concept borne out of passion.

Of course in spite of me putting my heart and soul into it, there is a slight possibility it might be a pile of crap and I might end up with hundreds of unsold books in my shed for which I can only apologise in advance.

Which is why I need to be specially nice to you dear reader.

Yet I feel reasonably confident that it isn’t and of course if you peruse this website and discover the many snippets and extracts of the book and can decipher my writing style then essentially that’s your yardstick right there. And I’m hardly likely to give the best or too much away for free am I?

In truth, and I suspect this is pretty common writing a book sends you through a massive range of emotions from thinking you’ve written the best book in the world one minute to being convinced it’s a load of shit and better off consigned to the “half arsed ideas I couldn’t finish” pile the next.

Like every other book I’ve done I’ve no idea how I got started or why on earth I’ve done it. I get the blinkers on and plough headlong into stuff with a scant disregard for the practical concerns.

Whereas other people let that sensible part of their brain that reads the gas meter and puts the bins out pipe up and say “What the hell are you playing at here? Pack it in. Right now!!” I have a perverse penchant for carrying on regardless.

I guess what I’m saying is that I’m the stupid one here.

But I’m stupid for your amusement.

Of course, even if it went on to sell ten billion copies then I’d still be fondest of those who have bought the first 100 copies. I’ve kept your email addresses purely to keep saying thanks not to pass them on to third parties who may contact you with relevant offers if you decide not to tick this box.

Once it’s in the shops in the autumn then quite frankly I can’t be grateful as I won’t have a clue who’s buying it.

So what I can offer with this book will at the very least be informative, revealing and contain a very high level of content.

I like to think it is light hearted and humorous set against a compulsive desire to see parts of the country I’d never dream of visiting.

I am easily amused with a keen observational eye and an uncanny knack for getting into unnecessary scrapes from seemingly innocuous situations.

I am sure people will recognise the anally obsessive streak inherent in my character which has forced me to pursue this mission as well.

Yet even so 350 pages of eating pies and nothing else would quickly get boring so the pie hunt is merely the central aorta running through it whilst a number of light sub plots unfold.

The compulsion to find perfection

It’s slightly North West biased but hey what can I say – it’s where I live and it’s where the pies are out of this world.

The book takes an anecdotal diary form as I review 314 pies from all over the country and also contains around 100 photos with every purveyor listed and indexed in the back for the discerning pie rambler.

It concludes with awards, recommendations and league tables bringing together the madness in a logical way that only an accountant and occasional scribbler riding out a mid-life crisis can do.

In essence, Life of Pies is the result of what happens when someone takes their hobby just a little bit too seriously….

Life of Pies is available to pre-order here now for just £9.99 plus p&p

Also, click here for details of a special pre-order offer only available until 30th June