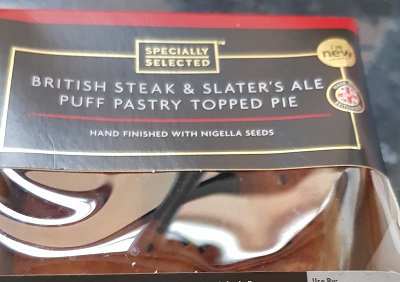 It’s been a while, I actually did this review at Christmas but only just managed to plonk it on the site. Anyway, here goes….

Like I need more food to eat over Christmas. But I suppose it’s a pleasant change from the mountain of cheese and pate I’m currently wading through.

Purchased from THEE ALDI at a price of, hang on, *checks receipts*, £1.79, I bought it because I had not seen it before and I fancied a pie. It is a British Steak and Slater’s ale puff pastry topped pie.

On the negative side, puff pastry is definitely the poor cousin of shortcrust pastry.

Furthermore, the description that it is puff pastry topped, implies that it might not be wholly encased, but I checked before buying. A top crust only pie usually gets thrown out of the window as opposed to in my trolley.

It is also hand finished with Nigella seeds – bloody celebrity chefs – claiming they invented seeds now I see. I’ve never heard of them to be honest, but they look like poppy seeds which generally add very little.

On the plus side of course, it has ale in it, Slater’s Ale no less, and of course it is that time of year, whereby nearly everything we eat (as well as drink) has those two little words on the packaging: CONTAINS ALCOHOL.

Never heard of the brewery in question but it doesn’t say whether it is their Ultra Pale Ale, their Top Totty blonde (ooh they’ll have that banned in a couple of years) or their Premium Best Bitter but you can’t whack a steak and ale pie. So long as you can taste a bit of ale in the gravy that is.

So, twenty five minutes in the oven on the trusty tray, which has seen some serious pie action over the years I’ll have you know.

It pops seamlessly out of it’s tray, fully intact when it’s cooked and just gives off a light pastry aroma, with the content still fully insulated. Upon opening up, there’s a decent amount of filling and a nice bit of fruity gravy as I lick my pie knife. There’s also some good sized visible chunks of steak. 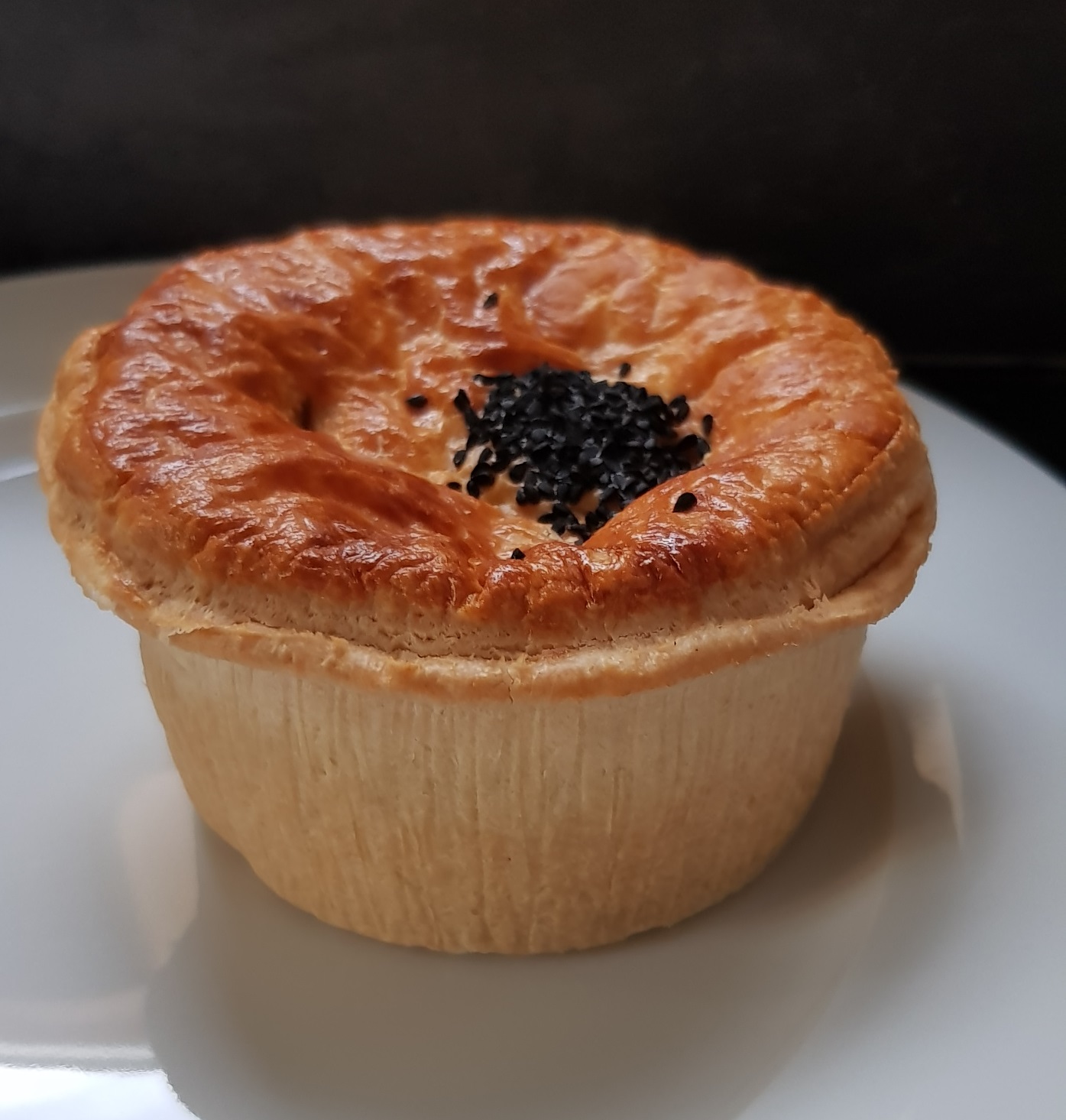 Place 7 I’m not about to diss any Aldi checkout girls, they’d batter me and I’d have to go to Lidl instead

Pastry 8 I’m not the biggest fan of puff pastry but it is light and crisp and the whole pie holds together well, still a knife and fork and plate job but that feels always necessary when eating a puff pastry pie as it goes everywhere

Package 8 Well filled, great meat and gravy content, a little bit of airspace in the corners but that’s to be expected given the way the puff pastry can expand in the oven

Palate 7.5 I can’t mark it too highly on taste as I’m not really getting the ale but what I do not get is a lovely, rich fruity gravy full of carrot and onion and delicious chunks of beef

Price: 7 Curiously listed as a “PIE FOR ONE” on the receipt, as if there’s any sort of other pie in my world, I don’t share pies!

Portion 8 Could I eat another straight after the first? Of course I could! But that’s because I am a greedy ravenous bastard, not because it wasn’t a hefty pie. Fair play, I’m mainly satisfied.

Total 52.5 / 70. A respectable scoreline for a supermarket pie. Dearer than the bog standard Aldi range but with a touch of premium taste and presentation about it. I’m off to Google “Nigella Seeds”. Always learning you see!