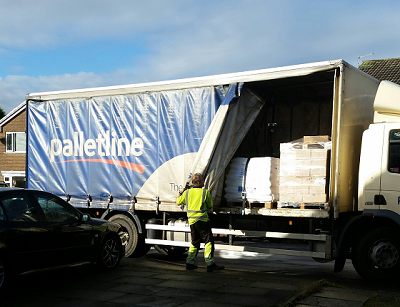 It was a night which delivered everything it promised. Pies, mainly and plenty of them! The back room of the Raven proved a great little spot for the assorted ladies and gents of Wigan Pie Society to celebrate the launch of Life of Pies in no uncertain terms.

I had a few shocks and setbacks along the way, not least concerns about the delivery of the books in time after they got held up in customs but everything on the day went smoothly.

Fifty boxes of books arrived at just gone 10.30am on Friday 24th October 2014 and my poor weedy little arms, more used to pen pushing and keyboard plonking nearly fell off as I handballed 1,000 books into the shed.

From there on, pre orders had to be signed, sealed and delivered in a frantic couple of hours, interjected with a pie for lunch (of course) and then onwards to the Post Office to send them out all points north, south, east and west.

Despite me completely doing their collective heads in by bringing five boxes of books to their counter in a short space of time, I can’t rate the Post Office staff at Asda highly enough for dealing with “high maintenance” customers like me while I filled several sacks single handedly with Life of Pies copies. The fact one of the staff is a big Mudhutter fan always helps matters.

The launch started quietly and nervously for me after a frantic day of organising and distributing but it was a pleasure to see a table or two of familiar faces. I’d best not mention names for fear of missing something out but those of you there know who you are and your support as ever is massively appreciated. There’s a proper little community that support events in the town and throughout the night it was great to see so many friends turn up and quite a few new ones who appreciate the independent writing that myself and many of my cohorts churn out. 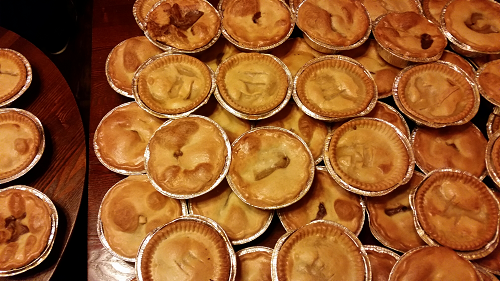 If you’ve ever seen what a hundred pies on a table looks like then the photographic evidence is there for all to see. I felt a bit under pressure to deliver something special for the launch and of all the pie makers based in Wigan and the surrounding areas, Bowens perhaps slightly had the edge so I got in touch with Paul and Vinny.

I’m always a bit self critical of my own pie critiquing. Were their pies really any good? Was I just particularly hungry that day and got carried away? No worries on that score, Bowens have been used for the WORLD Pie Eating Championships the last few years (held in Wigan of course) and simply epitomise what perfect Lancastrian pies should be like.

A good mix of meat and potato, steak, and local specialities Butter Pies, along with some Cheese & Onion pasties for the vegetarians amongst the gathering. The “Pie Mountain” took some shifting but both launch night guests and late night stragglers set about polishing them off with aplomb. I’ve got four left in my freezer, craftily hidden by my missus on the night for future consumption. 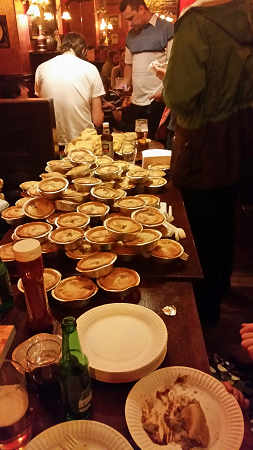 During the course of the evening, The Raven‘s landlady Tina also put one of their own steak pies under my nose, a wonderfully rich meaty treat with dark gravy soaked in opulent ale and I need to thank her again for letting me take over the pub and for nothing being too much trouble.

It was great to chat to Paul Bowen and find out all about how the magic is brought to life. News that business is good is always pleasing to hear when you see the quality of their output.

And of course travelling half way across the country  to visit the land of Pies was one other illustrious guest: The PieRateers are a very well established and popular pie blog which has been rating pies since 2009 and have given great support to me and my project and it was a pleasure to finally meet Rob and talk pies, indeed to taste pies! I spent a bit of time taking Rob around some notable pie shops in Wigan the following day for good measure.

Three weeks on and things are starting to settle down which is good, and also not so good. To sell over 300 books about pies is perhaps way more than I could have imagined but due to minimum order quantities I still have a lot stuck in my shed.

Hopefully, in the run up to Christmas things will pick up. The book is now on Amazon, plus I am popping into Waterstones in Wigan to see where things are up to there. I’ve got a mountain of things to do: press releases, writing to publishers and agents, dealing with local bookshops and online retailers and a couple of other little tricks I have up my sleeve to boost sales.

I’ll be doing a bit more blogging over the next few weeks as well as a bit of guest blogging in order to keep the book in the public eye. And there’s one or two independent reviews coming in such as this brilliant one on Tague Media. So if you have read the book and liked it, please send me your positive feedback. Or even better post a review on Amazon. If you didn’t like it, well I’m sorry about that but it’s too late for me to change it now 🙁

My bank account is still a little empty right now but I am delighted to be at this stage and to have written and completed a third book.

And if you haven’t bought the book yet, getting hold of it is just a mere click away. With all sincerity, it means the world to me every time I get an email through…..